An initiative by Rowing Ireland (formerly the IARU) to develop more rowing clubs in Ireland was to be the start of what would become Tralee Rowing Club (TRC), Cumann Ramhaíochta Thrá Lí. In the summer of 2004, the then chairperson of Rowing Ireland, Frank Durkin, approached Ursula Barrett of the Kerry Local Sports Partnership (KLSP) with the idea of arranging an open day on the Ship canal to assess the interest in the sport in Tralee/North Kerry. Frank arrived with a "trimmy" training boat and took people out on the basin. A number of individuals attended including Galway woman, Mary Bonner, who had extensive rowing experience from her days rowing in Galway at junior and senior level, both nationally and internationally.

Many months were spent ascertaining interest in the sport, getting more people involved, building the infrastructure and working to formally establish a club. Frank provided the Club with a coxless quad, oars and a trailer and Kerry County Council (Tralee Town Council at the time) allowed the Club to use the slipway at the basin to launch its boats. The first boat was launched on the canal in spring 2005. Thanks to the generosity of Kieran Rutledge, the early days meant storing the equipment in one of his buildings in the shipyard at Blennerville and transporting it to the canal each weekend for rowing. The Club had only one female crew at this time.

In autumn 2005, the Club obtained planning permission from Kerry County Council to erect a container to store more boats and thereby take on more members. The container arrived in March 2006. Ed Sheldon and Ian Robertson extended the container to ensure the boats would fit and, with some very creative engineering by Ed, the container was able to house up to ten boats. The pontoon was purchased from Muckross Rowing Club later that year. The site was secured by the erection of a gate by James O'Connor.

Over the years, members attended many Regattas and Head of River races around the country and were successful at a number of these events, not least at the National Junior Championships in 2011 where Sinead Ryall won the Club's only championship medal in the J15 1x event.

Planning permission to construct a clubhouse on site was secured in March 2013. Sports Capital funding from the Department of Transport, Tourism and Sport in 2012 and 2014, together with a significant fundraising campaign (including Ireland’s first ever outdoor 24-hour Rowathon) meant the Club could commence the construction of the clubhouse in September 2014. Michael Burke, Architectural Technician, designed the building; Colin Yelland of Yelland Architects Ltd was the Project Architect and J F Flynn Construction was the contractor. Members moved into their new home in September 2015.

The Club also received funding for the project from Kerry County Council, the NEWKD, the KRSP and the Tralee Chamber Alliance, together with financial contributions from local businesses and the people of the town. The Club thanks them most sincerely for their continued generosity and support. The clubhouse was officially opened in April 2016 and named after stalwart club member and dear friend, John O’Shea, who passed away suddenly in October 2015.

The Club continues to go from strength to strength, with membership currently standing at over 90 people. Many people have contributed over the years to the growth and success of the Club. Significant time, commitment and enthusiasm of coaches, successive management and fundraising committees, parents and rowers have all made the Club what it is today.

Rowing Ireland, the National Governing Body, awarded Mary Bonner the Munster Branch Award in 2014, recognising her commitment and dedication to the Club since its inception and to the sport itself.

The clubhouse was the first step in the Club’s infrastructural development plans. The Club is now focusing on improving the launching facility. Planning permission for a new community accessible, disability friendly pontoon was secured in 2016 and fundraising initiatives are in train towards funding its construction. 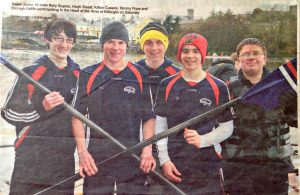 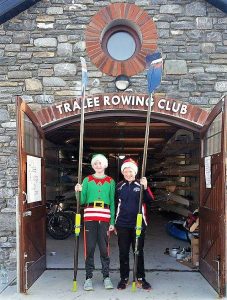