A smaller band of rowers than usual traveled to Dublin Metropolitan Regatta on Blessington Lake in Co. Wicklow. It is a 2km regatta and part of the Grand League series.
It was a busy day as all crews won places in finals.

Blessington is a very spectator friendly venue and all crews were able to provide plenty of vocal support for each other.
Sean Morris came 1st in the MJ16 1x, winning a medal.
Sean Morris and Conall MacThreinfir came first in the b final of the men’s division 2 2x earning them 2nd place in the MJ162x.
Rosie Giles came 1st in the c final of the Women’s division 2 1x, Rosie Giles and Sadhbh Cadogan came 3rd in the b final of the Women’s division 2 2x. Paula Moloney came 5th in the B final of the women’s Division 2 1x. Niamh Greaney and Paula Moloney came 1st in the B Final of the women’s division 2 2x.
James Morris raced in a composite masters 8+ with members of Galway, Muckross, and Shandon Rowing clubs.
Sadhbh Cadogan chose a big stage to race in a 1x for the first time and in her heat and final gave performances to be proud of
The last time Tralee Rowing Club attended this regatta in 2019 we traveled with just 2 junior single scullers, it is testament to the progress of the club that we now have such a big number of crews seriously competing. The committee and coaching team would like to congratulate all participants and thank all those who supported our athletes in getting to Blessington. 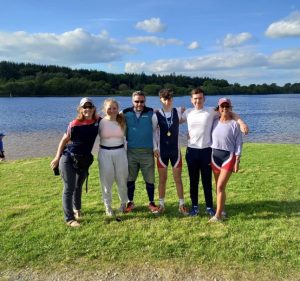 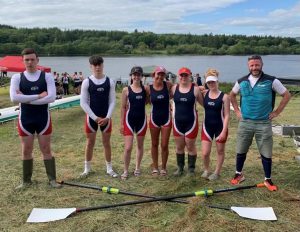